Just added to your cart

Getting to know some varietals: Bourbon

Bourbons tend to be sweet, complex, and delicate with crisp acidity, but as all coffees, may change depending on where they are grown. And, as most of the coffees cherries are red, some bourbon could be pink, yellow or orange.

Is a natural mutation of bourbon, founded for the first time in Brazil in 1937. It is a more productive and more disease resistant than the typical Bourbon. Caturra is popular in Colombia, Costa Rica, and Nicaragua, although Brazil still produce a big quantity of Caturra. It tends to produce coffees that have bright, citric acidity and low to medium bodies.

However, Caturra are considered to be of lower quality than Bourbon.

SL28 is not high yielding or disease resistant, its beans are considered to be of deliciously high quality, with a juicy body, intense sweetness and tropical flavor notes.

In the other hand, SL34 is a bit more productive than SL28, and although it’s still considered a high quality bean, it is not considered as exciting or flavorful as SL28.

This relative of bourbon was developed in El Salvador and released for commercial production in 1977. This plant produces small beans and cherries, but excellent quality when grown in high elevations. It is said to be sweet, with notes of caramel or brown sugar, complex acidity and a heavy mouthfeel.

This is a mutation of bourbon first cultivated in the town of Sarchi, Costa Rica, in the mid 1900s. It is known to do particularly well on organic farms and in extremely high elevation environments. Tends to produce flavors like fruity, sweet and acidic.

This plant is from El Salvador. It was discovered in 1949 and named after the family who owned the farm where it was found. In the cup, it is said to be similar to the bourbon, but less sweet. And due its small size, it let the farmers cultivate more in the same area. 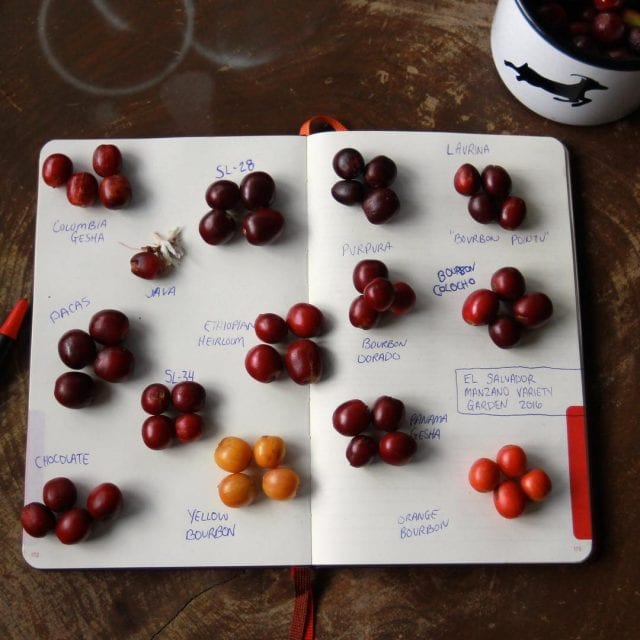